The echinoderms which aren’t round 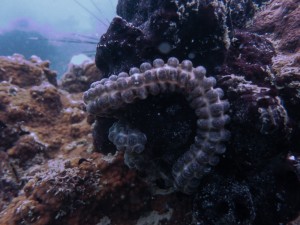 In the last article I talked about some generals facts of echinoderms, now let’s go deeper into the details and observe the class of the “sea cucumbers” (holothuroidea). First of all, the sea cucumbers look different and don’t have the typical radial symmetry of their relatives, the sea stars, sea urchins and other echinoderms.  Instead, they partly keep their bilateral form from their initial larval life stage (see my last article for more details) giving them a worm like appearance. Sea cucumbers come in a great variety of colors and shapes and over a thousand species of sea cucumbers are known. Most reach 10 – 20 cm length in their adult stage, but some are only a few millimeters long while a few are giants and reach over two meters in length (synapta maculate). Variations in skin patterns and colors are almost unlimited, reaching from black, green, electric blue to vivid purples or shocking red tones. Like most echinoderms, sea cucumbers can be found in almost all marine habitats, from shallow sandy shores and coral reefs down to the deep sea level in several thousands meters depth.

The vacuum cleaner of the sea beds

Sea cucumbers are filter feeders, living off small organic particles found in the sea water and sea bed. Some possess long mucus-covered tentacles around their mouth which they hold into the water column to catch organic matter; others use their tentacles to sweep over the sea bed. Once enough edible particles are caught with their feelers, they simply put their arms into their mouths and suck the foods off their tentacles. The cleaned tentacles are stretched out again and the process is repeated. In this way, sea cucumbers are able to filter a great quantity of particles from the water and sea bed, hence playing an important role in keeping the environment clean. Studies showed that environments with lots of sea cucumbers had a much better water quality than sea cucumber free water habitats.

Welcome to the sea cucumbers butt

Some sea cucumbers have a very strange but effective defense mechanism: When they feel threatened they point their butts towards their enemy and start to contract their body wall muscles. The contractions cause their internal organ to detach and finally to be squeezed out through their gaping buttholes (a process called “evisceration”). Parts of their respiratory organs form sticky white tubules which look like a kind of spaghetti and  in which the predators can be entangled. Those tubules often contain toxic chemicals called holothurins (the same chemicals which make sea cucumbers a deadly meal). Those chemicals are able to kill the entangled enemies. Although not all sea cucumber are able to kill predators through this method, the expelled slimy organs are often enough to distract the threatening animals. During the period in which the enemy is busy to get rid of the slimy and sticky organs, the sea cucumber have time to make itself disappear. After that, the fantastic regeneration abilities of echinoderms comes into play. In just three to five weeks the internal organs of the sea cucumber are completely regenerated and ready to be expelled again if necessary.

Below some nice documentary from national geographic about the sea cucumbers gut ejection defense!

Congratulations to Jeff, Steph and Kik for their s

So much fun with 8 Taiwanese expats from Bangkok!